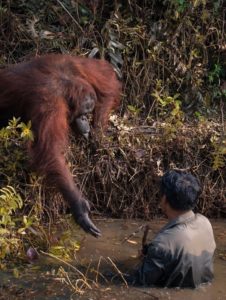 In this week’s issue of Weekly News, we have: the results of our latest poll, a story from around the world, and another ‘Who Was?’!
Firstly, the results of our poll asking if the TFRC Story should be published in one go or chapter by chapter was an exact draw. 50% of people voted for each side. Therefore, we have come to the compromise that it will be published in three sections. The first two sections will be coming out very soon, but we are still working on the third part and finishing the editing. You have been very patient waiting for the Story, so we might be posting an added bonus story as well.
Moving on, here is a story from around the world! An orangutan offers a helping hand to a man in a muddy river in Borneo. A man who worked for the Borneo Orangutan Survival Foundation was searching for snakes in a muddy river in a forest conservation area in Borneo. Many snakes pose a threat to monkeys and primates as well as people, so the orangutan reached out a hand to help the man, who the orangutan believed had fallen in to the snake infested river, while he was actually clearing away snakes from the area to help the orangutans there. The friendly creature was spotted by amateur photographer Anil Prabhakar, from Indonesia, while he was trekking with his friends.
Finally, who was Marie Curie? Marie Curie was a physicist, chemist and a pioneer in the study of radiation. She was born November 7, 1867 and died July 4, 1934 and along with her husband, Pierre, discovered the elements polonium and radium. Some of her discoveries include: Uranium rays electrically charge the air they pass through. Such air can conduct electricity. Marie detected this using an electrometer Pierre and his brother invented. The number of rays coming from uranium depends only on the amount of uranium present – not the chemical form of the uranium. From this she theorized correctly that the rays came from within the uranium atoms and not from a chemical reaction.
The uranium minerals pitchblende and torbernite have more of an effect on the conductivity of air than pure uranium does. She theorized correctly that these minerals must contain another chemical element, more active than uranium. The chemical element thorium emits rays in the same way as uranium. Finally, she founded the Curie Institutes, which are important medical research centers.